Who’d have thought it? A revolution in brewing, Ireland. And beer. Irish craft beer, it’s a taste sensation.

Wandering into your next pub after a hard day on the trail you may think you might be experiencing deja vu. A warm welcome behind the counter, low beamed roof and, depressingly, the same beers on tap. Often brewed by computer and chilled to within an inch or their lives lest you should taste anything.There’s a reason they give you all that ice with your bottle of cider. Ask for a wine and you’ll be given one of the small bottles you can get on a multi-buy in the supermarket, at least you can be assured of some kind of quality. But look a little further beer lovers, look out for the small sign that whispers ‘craft beers’ on its features list. 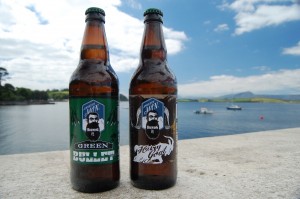 Two bottles of beer from Mountain Man Brewing try to catch some rays before heading down the pub.

For years Ireland has been dominated by the bullying large breweries, forcing the owner to take only a limited amount of beers and browbeating the public with endless advertising into thinking they were the only beers worth drinking. One of my favourite details from a bottle label is seeing that of a particular brewer of cider ‘boasting’ of the 22 different types of apples in its cider. Twenty two, are you kidding me! Imagine a wine made of twenty two different types of grape.

But, like the viewer that cries out ‘Enough!’ in the middle of yet another series of ‘Heroes’ or ‘Lost’, when the plot gets too surreal, and switches the channel some thought that there was another way, a way with beers made with care and a whole different world of taste. 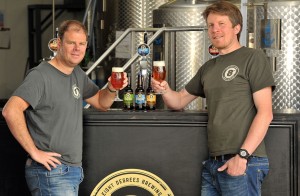 Cam (left) and Scott (owners of the Eight Degrees brewery) challenge you to resist the temptation of their Irish craft beers.
Picture by Justin Kernoghan

From a small time movement in the 90’s with breweries like O’Hara’s and Galway Hooker we now have a full on revolution, brewers with the imagination and drive to try to convert the Irish public to the ‘twiddly’ tastes of an IPA and nutty, smokey porters.  Some pubs have wholeheartedly embraced the revolution and writers such as Kristen Jensen and Caroline Hennessey at craftbeer.ie keep the movement in the public eye and write about it often in the press pairing beers with different types of food and keeping the notion of craft beers fresh. But the majority are still stuck in the dark ages with the same old identical drinks on tap.

You might spend a little more on a craft beer but brewing a proper beer costs more than a macro brew, on average it takes ten times the manpower, but it’s worth it. You don’t begrudge paying a little more for that smoked salmon from the smokehouse, this is the same, and what’s more, you’re sticking it to the large corporation. What could be more Irish than that! 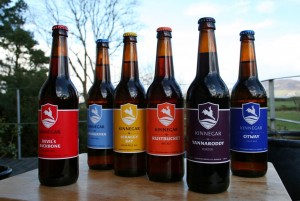 If out on the trail try not to get blinded by the regular macro brews that hit you as you enter, the advertising pairing of ‘Ireland’ and ‘Guinness’ costs an awfully large amount of money to keep in your head. But there are pubs with more pumps and bottles ready to entertain your tastebuds. If you see Galway Hooker on the taps you’re likely to find a further selection of craft beers but if you only see the regular range of stouts and lagers look a little lower, look behind the counter. Sometimes, at the bottom of the fridge you just might find a cheeky little number from one of Ireland’s many burgeoning micro-breweries.

The purveyors of the Irish craft beer movement are doing their utmost to get into the pubs and bars around Ireland and that helps to keep those who love the outdoors and a decent beer happy. Out on the Kerry Way? Pop into Riney’s or D. O’Seas in Sneem for something from the aptly placed Mountain Man brewery, not to mention Killarney’s own brewing company. You lucky people. Thirsty in Roundstone in Connemara? Look no further than the Shamrock bar for Devil’s Backbone, an Amber ale from Kinnegar Brewing to slake your thirst. You might have to point the barperson in the right direction, it’s a ongoing, learning process even for those in the industry. In Ennis this author gave up on asking for the bottle of IPA twinkling away in the cabinet, resorting to: ‘The green labelled one…bottom left’.

Another of Peter Kay’s quotes is about the cheap soft drink your mum used to buy – ‘Panda Cola, or Streamway Cola. 8 litres for 40p. Crap pop. Sh*t pop. Pop you don’t want.’ Have a craft beer, join the revolution, just don’t get me started on cheesecake.

June 26, 2015By The Pathway PorterLifestyle & Hobby

Clifden Craft Beer Crawl (Part 1)There Is Nothing Like A Lane
Get In Touch
Please read our Privacy Notice for information on how we manage your data.

FacebookTwitterRss
From Our Blog

You can find out more about which cookies we are using or switch them off in settings.

This website uses cookies so that we can provide you with the best user experience possible. Cookie information is stored in your browser and performs functions such as recognising you when you return to our website and helping our team to understand which sections of the website you find most interesting and useful.

Strictly Necessary Cookie should be enabled at all times so that we can save your preferences for cookie settings.

If you disable this cookie, we will not be able to save your preferences. This means that every time you visit this website you will need to enable or disable cookies again.