Here at TPP we are firm supporters of the belief that decent beer goes hand in hand with outdoor activities. There’s nothing like kicking back in a pub with a small celebration bubbling away in front of you and discussing the day just gone. So, in the coming weeks and months we hope to bring you some assistance with your craft beer drinking by bringing you a trawl around many of the towns and villages on the outdoor pursuit circuit and to show you what’s where. We’ve decided to give it a working title ‘Sacrificing our livers for your entertainment‘.

So, why are we in Clifden? It’s not on any long distance walking route, the closest would be the Western way which heads off from Oughterard via Maam Cross to Leenaun. That said, Clifden is a great jumping off place for the Wild Atlantic Way and is a great hub for cycling. From here you can see some of the fantastic attractions in the area such as Connemara National Park, the Twelve Bens mountain range and the Island of Inishboffin. We had spent a long day shuttling in some clients to Clifden from Dublin and, in need of some reward, wandered off to the nearest watering hole.

The tastefully restored buildings of the long defunct Midland Great Western Railway are at the top of the town at it was here we made our first stop. We’d dropped the clients at the Clifden Station House hotel so we adjourned to the main bar opposite the hotel and it resulted in a small fist bump as craft beer was available. 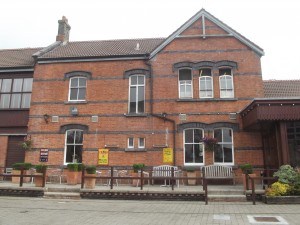 The Station Bar, one of the welcome homes for craft beer in Clifden

Such was our desire for a bottle of the craft-y stuff that we completely missed the Franciscan Well and Galway Hooker on tap, craning as we were as we craned to look into the chiller cabinet, and the knowledgeable barman knew exactly what we were asking for when instructed for an IPA. Thoroughly impressed so far we settled down to enjoy a Mountain Man, Hairy Goat. At this point we’d normally describe the beer but being so thirsty it barely touched the sides, all we can say is that it was excellent and you’ll just have to wait for my next Hairy Goat for a proper appreciation. 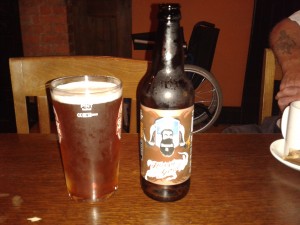 Say goodbye to the Hairy Goat

Clifden Station House is, as the name implies, a converted station house. The old Clifden line was closed in 1935 and innovative use of the defunct buildings makes a for a pleasant area. As well as the bar there’s the old engine shed which is now a museum with the rails visible in the ground and even an old passenger coach under wraps awaiting restoration.

Inside the bar they’ve made a decent fist of the decor, railway memorabilia adorns the walls including an old signal with lots of bare brick and soft furnishings to give the place an earthy yet comfortable feel. One gripe was the band playing the same old cliche tunes: ‘Dirty Old Town’ etc., that would normally have us bolting for the door, however the layout of sound-proofed nooks and crannies provided enough protection so as not to interfere with the serious business of drinking and chatting.

With one of the party having to depart back to Dublin (watching us drink was just too much) it was time for the next pub just a couple of minutes into town. TPP set out with the sole intention of hitting every bar in town but failed to notice the late arrival time into Clifden. There wasn’t going to be craft beer in every pub so with ‘If they don’t serve craft beer, turn around and walk out.’  (Possibly a motto for life there!) being the mantra we thought we’d see a few pubs to report back on but it wasn’t until TPP looked at the clock and realised it was quickly approaching the witching hour that we realised that his was only going to be a small taster of the craft beer scene in Clifden. 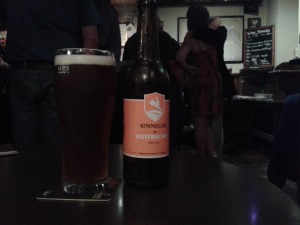 A Kinnegar Rustbucket chilling out in Griffin’s Bar

With time against us it was straight to Griffin’s bar and lounge on Main street. The front bar was typically Irish; welcoming, low wooden ceiling, subdued lighting, lots of local sports memorabilia and photos on the wall. Brass fittings and the sew-on shields of many police and fire departments from around the USA along the top of the bar. On entering there was the low hub-bub of chat and laughter and in the back lounge there looked to be the rumblings of a disco with 80s classics from Bryan Adams, ZZ Top although Baltimora’s Tarzan Boy made the eyebrows lift in a not-heard-this-for-a-while surprise. We took a seat in the front bar. 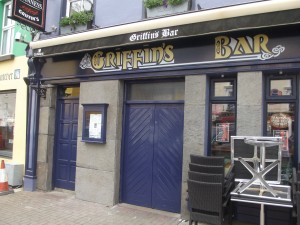 Griffin’s Bar in recovery after another Saturday night.

Beer-wise we’d struck lucky, TPP craned over the bar to see what was in the chiller cabinet only to miss the craft beer menu sitting on the serving top. On offer was two types of cider: Dan Kelly’s from Athlone and Tempted?’s Summer Sweet. The craft beers were Galway Hooker, Independent’s Connemara Gold, Sheep Stealer from Black Donkey and Kinnegar’s Rustbucket. Result!

A tough choice to begin with then but our request for a Rustbucket prompted a short pause and a blank look. Resorting to the standard point-and-click-at-the-menu method of ordering a craft beer, it prompted our friendly barkeep into action with the ever so slightly bashful ‘These are a bit new’ as he made for the fridge. There was a slightly awkward silence as the beautifully chilled beer came with a glass of ice akin to that proffered with a bottle of macro-brew cider but a quiet ‘There’s no need for the ice.’ quickly spared the blushes.

The Rustbucket was in fabulous form, with a whiff of geuze on the nose it led to a superb hoppy hit. Long on the palate with spice, zest and just a little bit of dustiness it made you want to quaff it down but not so fast so that you could enjoy the layers coming through.

As the clock ticked by there were subtle hints that Griffin’s might be Clifden’s late bar. People started coming in the side door rather than the front door,  young guys were persuading the kind-of doorman to let some people in after a quick phone call, women dressed for a Saturday night out turned up. Yup, late bar.

Not wanting to risk the possibility of finding TPP beer-less and without a pub to go to it was back to the bar for something off the list. Sheep Stealer advises you to pour the beer slowly from the bottle on the instructions but I couldn’t prevent the snow cone making an appearance half way through the pouring. There was a quick cut-away to thinking there might be a need for some sort of decanting cradle but we ploughed on despite looking like amateurs. The cone produced reminded TPP of Duvel (I seem to be on some sort of Belgian comparison here) and the nose helped this along but the initial taste left us rather disappointed. Maybe it was all the twiddly bits from the Rustbucket but the Sheep Stealer seemed a little lacking for something of 5.6%. Very straight up and down but we could taste the quality and we’ll be back to for another taste. 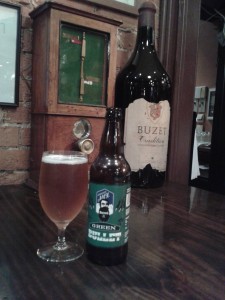 Small, far away. A soon to be empty glass of Green Bullet.

With the long day starting to have an effect on the eyes it was back to the rest stop. After stepping outside it looked as though no bar would be open, even the kind-of doorman from Griffin’s thought the same, but back at the Station Hotel they were catering for residents. With time for one more we were able to peruse the selection. 8 degrees’ Knock Mealdown and Barefoot Bohemian were twinkling away but the remaining Green Bullet from Mountain Man was quaffed as it meant they would have to order some more! It was a fitting end to the evening, it’s dry, citrus-y qualities bringing nods of approval as we chatted about with the excellent bar staff about the difficulties of brewing and bringing home just how much care goes into the craft beers we drink.

Sadly, that was as far as TPP got but the good news is that it does mean we’ll have to go back and with a couple of tours planned we’ll be able to report back soon. Just the small matter of getting rid of the Tarzan Boy ear-worm first.

July 19, 2015By The Pathway PorterUncategorized

PrevIrish Craft Beer, it’s the future.
Get In Touch
Please read our Privacy Notice for information on how we manage your data.

FacebookTwitterRss
From Our Blog

You can find out more about which cookies we are using or switch them off in settings.

This website uses cookies so that we can provide you with the best user experience possible. Cookie information is stored in your browser and performs functions such as recognising you when you return to our website and helping our team to understand which sections of the website you find most interesting and useful.

Strictly Necessary Cookie should be enabled at all times so that we can save your preferences for cookie settings.

If you disable this cookie, we will not be able to save your preferences. This means that every time you visit this website you will need to enable or disable cookies again.